NOTE: It is recommended that you play with a mouse or touchscreen, not a touchpad.  I won't stop you, though.

Meet these amazing little microbots called "Pixels," the first machines created that have the remarkable ability to reproduce.

But... what's this? There appears to be some kind of digital plague infecting them. It's your job to breed them so that they're more resilient to the plague.

The goal is to get your pixels to a certain population count (which varies by difficulty) by breeding them to be less susceptible to the plague.

Each pixel has three unique attributes: color, shape, and size. The plague appears to be programmed to target a certain set of attributes.

These icons tell you what kind of pixels the plague is targeting.

The percentage is the average susceptibility of all pixels on screen.

Drag pixels to these boxes to breed them.  Dragging a pixel into each box will spawn three children, each with attributes randomly selected from their parents. The pixel dragged into the box with the circle will be "dominant", meaning children are more likely to be like that parent.

Breeding involves a lot of randomness, so results may not always be consistent.

Pixels undergo a process similar to mitosis, and have a tendency to mutate, so  it's not always necessary to be constantly breeding pixels manually.

These icons give you population details. The top icon is the total population of pixels, while the bottom is the number of infected pixels.

Infected pixels won't undergo mitosis, and will eventually disappear. They also tend spread the plague to other pixels. A side-effect of the plague is a visual fading in and out.

This is my first Godot Wild Jam (that I finished, anyway), and my second game jam ever. Had fun, and hopefully somebody somewhere enjoys this game for a few minutes, at least. 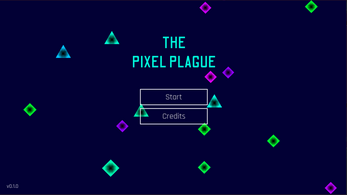